For a more than fortnight, a group of over 30 people has been camping on the Polish-Belarusian border. The situation of the immigrants – who come from Middle Eastern countries – is made more difficult by the fact that they are surrounded from both sides. On the one side by the Polish Border Guard, on the other by Belarusian services. From the very beginning, the Polish border guards have made it difficult to deliver aid and food. For the time being, it is completely impossible to get to the group of immigrants.

Maciej Konieczny, a MEP from Razem (Together) party, whose presence at the border for several days helped to publicise the issue, appeared on the spot.

„There are 32 people all the time, on this piece of land. They all have serious reasons to flee Afghanistan, and yet they are denied the right to international assistance. Border guards are guarding them under guns, and today there was an incident of violence. Border guards used butts to chase away several people who came close to the border. There are no toilets on site. Women are in the most difficult situation,” commented Maciej Konieczny of the Razem Party in an interview with our portal.

The representatives of the Lithuanian, Latvian, Polish and Estonian governments see it as a way of destabilising their countries. And, of course, as „a hybrid attack against Lithuania, Latvia and Poland, and thus against the entire European Union”. The Prime Ministers who signed the statement are of the opinion that these are actions planned and organised by 'Mr Lukashenko’s regime’.

According to the Ocalenie Foundation, migrants camped at the border are falling ill and have no access to water or food. Franek Sterczewski, a member of the Civic Coalition, has tried to provide them with medicines and food. He tried to reach an agreement with a Border Guard officer to hand over a package of foodstuffs and medicines. Sterczewski’s recording shows the MP proposing to the officer that they approach a group of refugees together. The man replies that he cannot let Sterczewski behind the cordon nor hand over any items to the refugees. He repeats that these are his orders.

An ambulance was also not allowed on site. The Border Guard claims that half of the group remained, as the others were taken away by Belarusian guards. Meanwhile, a protest supported by the Left took place in front of the Border Guard Headquarters in Warsaw against the inhumane treatment of immigrants. The construction of a three-metre high razor wire fence began after announcements by Defence Minister Mariusz Blaszczak and Prime Minister Mateusz Morawiecki. Soldiers began erecting the fence on Wednesday 25 August. It is to stand on a 180-190 kilometre stretch of the border, where it is a land border, theoretically the easiest to cross. The fence will cost, according to specialists’ estimates, about 400 million zlotys. There are also to be about two thousand soldiers on the border, to support the border guards.

The European Court of Human Rights ruled on 25 August that Poland and Latvia must provide medical care, food and temporary shelter (where possible) to migrants who are camping on their borders with Belarus. However, this has not changed the Border Guard’s approach. Border Guard spokeswoman Lt. Anna Michalska, meanwhile, assures that there are different people camping on the border, who change every day.
„We see 24 people, but it is difficult for us to say if there are not a few more people there. There are several tents, so there could be someone there too. This is all happening on the Belarusian side. These people are rotating, usually at night, when we don’t see it. We don’t see any children. There are about 20 adult men and four or five adult women. They are provided with food, we even saw cigarettes,” Border Guard spokeswoman Lt. Anna Michalska told TVN 24.

Donald Tusk has posted a video on his Twitter account. In it, he declares that Poland, like Lithuania and the entire European Union, has fallen victim to the provocation of Alexander Lukashenko, who is bringing „streams of migrants” over the EU border. He said that Poland faces a double dilemma: how to help the suffering people on the border, but also how to secure this border. He said that the victims of the crisis (which is „still small”) are both migrants and border guards, „whose reputation has been undermined, also by the ill-considered actions of the authorities”. The prescription, in the former prime minister’s view, would be a conversation between all political forces.

His appeal was answered by the Left, which said that refugees must be helped now. A video of this position was posted on Twitter by MP Katarzyna Kretkowska. The same politician applied to Polish consular units in Belarus with an urgent request to issue 32 refugees with Polish humanitarian visas.

A demonstration took place in front of the Polish Border Guard headquarters. The protest was organised by more than a dozen social and left-wing organisations, including Skłot Przychodnia, the Warsaw Youth Circle of the Workers’ Initiative, Aktion Democracy and Rescue Foundation. Several hundred people gathered at Niepodległości Avenue in Warsaw. In the crowd of people holding posters, banners and banners one could read such slogans as: „Border of Shame”, „Enough of cruelty!”, „Enough of the policy of torture and humiliation!”, , „We do not want Polish death borders”, „Decency more important than orders”.

Only 4.3 per cent. – The government believes that it is the employees who should be grateful. However, they have a different opinion. The budget sector in Poland will continue to be a low-wage zone, valuable employees will continue to leave and those who remain will be condemned to vegetation and lack of prospects. This is the effect of the government’s decision, which, in the budget act it passed, clearly spared a penny for people who work for the state every day. The trade unions, as we have already reported, are planning more protest action.

Changes to the education system’s reading list – more texts by Pope John Paul II and other archaic, conservative texts. This is the result of the ideological offensive of the Minister of National Education, Przemysław Czarnek. In his opinion, these changes are the result of the demands of the students themselves. Of course this is his invention. 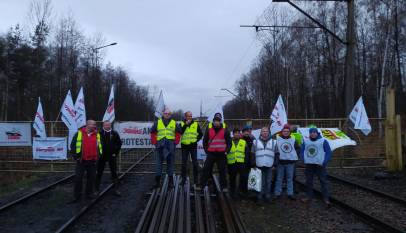