The ban on entry into the state of emergency zone was unconstitutional, the Supreme Court ruled. The ruling came in the case of journalists from ARTE and Agence France-Presse, who had previously been fined for entering the zone. The Ombudsman appealed that ruling to the Supreme Court.

The court ruled that the almost total ban on entering the designated zone is unconstitutional and contradicts even the law on the state of emergency. As a result, there are no grounds to punish journalists for being in a „prohibited area”, which they entered unknowingly.

The case concerns the situation at the end of September, when the migrant crisis on the Polish-Belarusian border was still of great interest to many foreign editors. Three journalists (one person from AFP and two from ARTE) were filming near Sokółka. They were in contact with the Border Guard, heading for their post in Szudziałowo. They entered the zone because they had taken the wrong road. The encountered Border Guard patrol understood the situation and simply told them to turn back. However, another encountered patrol, this time police, took away the journalists’ equipment and handcuffed them. Afterwards, the police applied for an expedited punishment for the three, and the court in Sokółka found them guilty of a misdemeanor of being in a prohibited place under the law. The court only imposed a reprimand on the journalists.

Two days ago, another hunger strike began in the guarded refugee center in Wędrzyn. Seven Syrians are on hunger strike.

„We can no longer stand being locked up. We respect Polish law, but there is no reason to keep us in these conditions,” wrote one of the foreigners, 27-year-old Munzer from Syria. Seven Syrian citizens have been refusing to eat for the past two days in protest against poor sanitary conditions and sluggish procedures. Some have spent more than four months in the center.

The foreigners often suffer from depression or PTSD. The 27-year-olds Munzer and Gaith, who have been in the center since December, are unhappy with the conditions there. Having fled conflict-ravaged Syria, the trauma returns at the sight of weapons. Both have already been imprisoned several times by the regime for political activities. The center in Wędrzyn is located on a military training ground, surrounded by barbed wire entanglements and guarded by armed officers from the army and border guards.

Conditions in the center are tragic. The barracks are overcrowded, with more than 20 people in one room. The water in the showers is cold. Access to the Internet is very limited – inmates can use computers 2 hours a week, and even this is not always achievable. There is no privacy or activities. There are no books, games or anything to pass the time in the center. They have a walkway fenced with barbed wire. Access to medical care is very limited and psychological support, so necessary for the majority of people arriving, is not available. One of the detainees, in a conversation with our portal, said that he had already sent 6 applications with a request for psychological assistance, but none of the letters received a response.

This is already another hunger protest in Wędrzyn. On 6 January, the Border Group reported on a strike that had already been going on for many days by a dozen people. One person fainted and the strike was discontinued as it had no effect.

A delegation from Die Linke, the German Left, came to Poland to see that the humanitarian crisis on the EU’s eastern border is far from over. Politicians and activists were not allowed into closed centers where migrants are held.

A delegation of the German Left – six female politicians from different German regions – met with activists who help migrants at the border. They were able to see with their own eyes the current weather conditions in the border area – for migrants, being taken to the forest means an immediate threat to life and health. Katarzyna Wappa, a resident involved with the Border Assistance Group, told us how in November she met an extremely exhausted, hungry and dehydrated man on the road near Hajnówka, without any documents which had been destroyed by Belarusian border guards.

– We met wonderful people who are trying to help refugees on the Polish-Belarusian border. They are above all women, who risk a lot to save human lives,” wrote Die Linke activist Katharina König-Preuss on Twitter.

The number of self-employed people began to rise during the pandemic and is still going up. The current government, supposedly „pro-social”, not only intends to address this, but actually nurtures the growth of this phenomenon.

During the pandemic, the number of self-employed, i.e. actual workers posing as one-person businesses, increased markedly. It is estimated that today already 20% of labor market participants are employed under B2B contracts, i.e. self-employment, instead of employment contracts.

On the 24th of January when they stood behind the factory barrier, with their flags, some serious, others happy and full of verve, it was as if the old paintings of fighting workers came to life. For the core of the conflict is as old as the capitalist system. Solaris workers had been negotiating with the management for several months, they demanded pay rises but were ready to make some concessions. The employer wanted to give even less – so on 24 January they went on strike.

How many people joined it? Albert Wojtczak, a local trade Union leader, estimates cautiously: on this shift, in Bolechowo and elsewhere, about 70 percent. After 3 p.m., the second shift will come. They will also protest, the mood is militant. Wojciech Jasiński, another trade Union leader, states: „As far as production is concerned, over 90% of the crew is out of work, production has stopped. – Those who do the hardest work, the most valuable work, and at the same time are paid the least, have stopped working.

A collective dispute between three trade unions and the management in the Pudliszki plant has just begun: Konfederacja Pracy (Confederation of Labour), NSZZ Solidarność (Solidarity) and the Trade Union of Meat and Food Industry Employees in Pudliszki. The unions have understood that only united in fighting for their rights can they achieve more, although the management’s stance seems intransigent.

The Pudliszki plant is one of the best plants in the entire global network of a large food concern. But this does not translate into the attitude of superiors towards their so efficient employees. According to Eleonora Dopierała, a representative of the protesting trade unionists, they have the lowest salaries in the whole chain. They receive the equivalent of around 900 euros gross per month. This is pitifully low. The pay rise proposed by the management this year is a mere 300 PLN gross – 7.5% of the average pay. The trade unionists are proposing 400 PLN, and we must admit that these are not shockingly high demands. Until now, employees have received pay rises from April, i.e. they were paid in May, almost in the middle of the year. They do not agree with this either. They also resent the humiliating treatment of people. For the 100th anniversary of the plant they received a… Chinese thermos, worth about 30 PLN each.

On the 25th of January Agnieszka, 37-year-old woman from Częstochowa, like earlier Izabela from Pszczyna, became another victim of inhumane anti-abortion laws in Poland. She died in hospital as a result of complications from a twin pregnancy. An abortion could have saved her life.

According to relatives of the deceased, a thirty-seven-year-old woman from Częstochowa, she was admitted to the Gynecology Ward of the Regional Hospital in Częstochowa on 21 December. She was in the first trimester of a twin pregnancy and complained of abdominal pain and vomiting. She was told that a twin pregnancy must hurt like that.

This week marks 120 days of the longest protest by judicial employees in Polish history. Their tent city in front of the Ministry of Justice is an expression of rebellion against mobbing, underfunding, infrastructural handicap and systemic feudalism. In Wojciech Łobodziński’s reportage they share their stories. 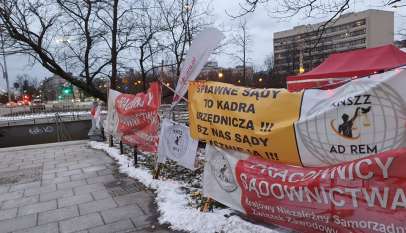 „To me! Pick it up! Bring me the file!” The workculture in the Polish judiciary